Painting for a Miracle 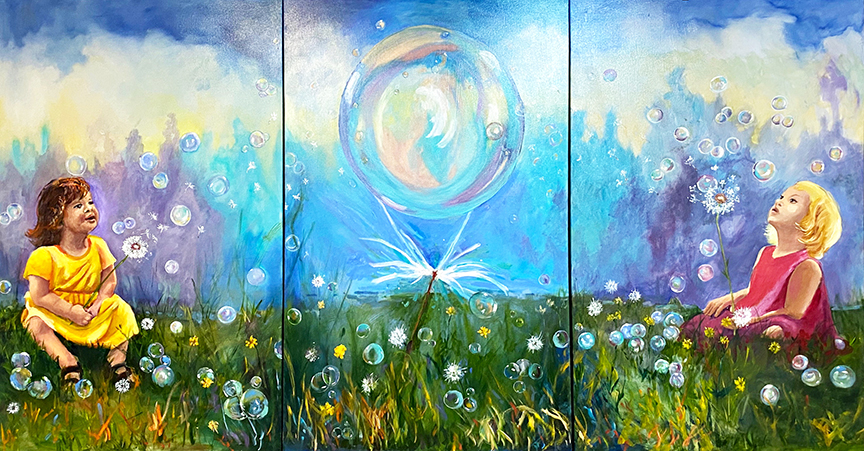 When Carolyn Guzman received a special request from a client recently, she had no idea what a special project it would become. A collector of Carolyn’s, Yara Guest, came by looking for a large painting for her Houston office. Yara is president and CEO of the Make-A-Wish Foundation for the Texas Gulf Coast and Louisiana.

“I just said I have a huge wall in my office in Houston and I wanted something original, beautiful and big”, she said. “You go with it, because I don’t like to dictate.”

Carolyn accepted the commission and decided to include her art classmates in Zavalla..

So the group got together and came up with a unique concept involving children and bubbles. Some of inspiration came from a poem by artist Joyce Renfro, “If bubbles were wishes, and wishes could fly.”

“We wanted something different, so children love bubbles, and we decided to incorporate the bubbles and dandelion fairies – as I always called them when I was little. I’d blow the fairies away and make a wish,” artist Jo Fowler, said.

The children chosen were based on Guzman’s grandchildren, but were creatively rendered so they didn’t look like anyone in particular.

“Art is more than just a visual thing,” Carolyn said. “You feel it. That’s why we left the background real free and happy.”

Yara was thrilled to have the collaboration with East Texans, especially as they live in an area that really doesn’t have a huge Make-A-Wish presence, she said.

“It was just really cool that a group would come together and make something so nice,” she said. “We have a lot of kids in the Deep East Texas area that want wishes granted and that are battling life-critical illnesses.”

For dates and info on specific events, please see our Calendar.

Gallery – Open to the Public.
Welcome!